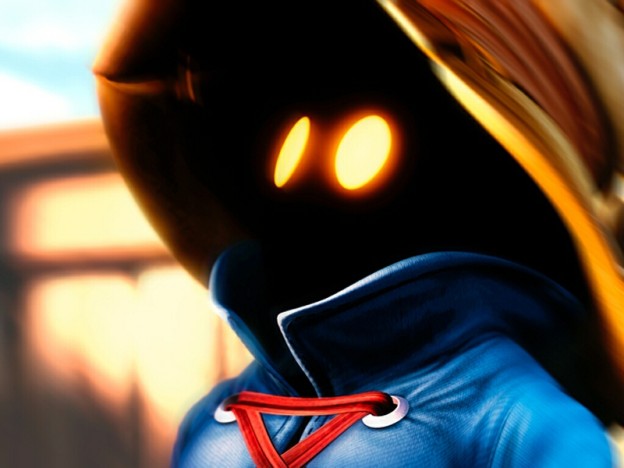 Welcome to day two. Favourite Character is actually quite a bit easier because my mind throws up “Vivi” without hesitation. What makes it hard though is when I turn to my brain and go “Why?”.

So for those who haven’t played Final Fantasy IX Vivi is the black mage of the game. He starts the game just wanting to go see a play, and by the end of it has discovered that he was a prototype war machine. He pretty much stumbles into the whole series of events accidentally and really wasn’t made out for the adventuring type but he perseveres throughout. Even the knight of the bunch, Steiner, notes that Vivi is the bravest of them all.

He’s not a foolhardy bravery either. When they land in terrifying situations the others put on a show; the cocksure thief impressing the ladies, the knight trying to shrug off his reputation, the princess trying to act like Queen, and the little child black mage shaking at the knees. He had no reason to act brave, he showed no qualms in showing his fear, yet when the time came he still stood up to his challengers.

He also faces struggles that the other members don’t. They’re just dealing with a genocidal madman from another planet. Vivi has to deal early on with the fact he was not only artificially made, he was made with the express purpose of a weapon of war, with many of his kindred mages responsibly for the deaths of many people. He suffers through a massive identity crisis, his friends assuring him of his free will and ability to be whoever he wants. And no sooner does he come to terms with this than he finds out that his kindred Black Mages, and also likely himself, suffer from a very short lifespan. A child, assumed to be nine or ten years old though hinted at being barely over one year old, suddenly made strongly aware of both his and his brothers mortality. He doesn’t have a very happy time. I’ve always felt Vivi was somewhat relatable. I certainly wouldn’t be acting all brave in the situations he’s in. And a 12 year old at a new school certainly having a bit of a time finding themselves. Though I can’t say at the time there was any mortality scares, but I’m sure as I get on I’ll find more appreciation in that aspects of him too.

As a video game character he’s also pretty nifty too. Black Magic is pretty strong, and his later abilities such as ReflectX2 and Auto-reflect make him nigh godlike.